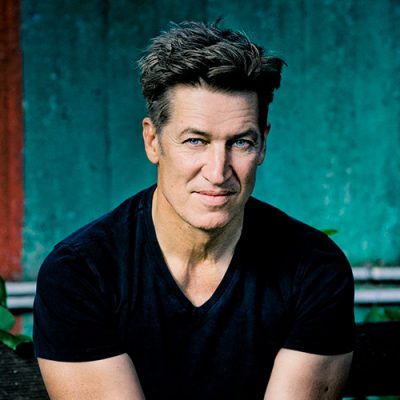 Information about the work of Tobias Moretti can be found at http://www.moretti.at/

Actor, organic farmer, enduro enthusiast – Tobias Moretti has many talents. Born in Tyrol, he is a committed organic farmer, brilliant character actor and enthusiastic motocross rider.
With his wife Julia, a successful Oboist, and their three children, Moretti lives on a mountain farm near Innsbruck in Tyrol. He has been running the 400-year-old farm since 1996 and breeds Tuxer cattle, a domestic cattle breed that is particularly at home in the Alpine region.
He also grows organic vegetables. Nature and his homeland Tyrol are very close to his heart. Therefore he is committed to environmental protection, gentle tourism and organic farming. When Moretti draws attention to the difficult situation of the farmers or the excessive tourist marketing of his homeland, he sometimes gets loud. Moretti’s commitment to the use of renewable energy sources is known far beyond Austria’s borders.
He is a welcome guest in discussion groups and is a valued agricultural expert. He knows his way around and communicates his messages in a credible and authentic way. His voice is heard.
In 2014 Moretti was awarded the honorary title of “Economist”. Only those who have rendered special services to the Republic of Austria in the course of their many years of agricultural activity receive this distinction.
Born in Gries am Brenner, Moretti studied music at the University of Music and Performing Arts in Vienna. After completing his theater studies at the Otto Falckenberg Hochschule in Munich, he moved to the Residenztheater in Munich while still in his first engagement at the Staatstheater Hannover.
In 1984 the young actor – who speaks fluent Italian – worked in Italy with Giorgio Strehler, one of the most famous theatre directors in Europe. In 1986 he moved to the Münchner Kammerspiele. Here Moretti celebrated success in numerous title roles, including “Troilus and Cressida”, Faßbinder’s “Katzelmacher” and Achternbusch’s “Der Frosch”. After first guest performances in Vienna, he made his debut in 1995 at the Vienna Burgtheater in Anton Chekhov’s “The Proposal of Marriage”.
Since the early 1990s Tobias Moretti has increasingly appeared in film and television. After a series excursion, which he concluded after two and a half years, he appeared in numerous television productions. For example, Moretti played the leading role of Stefan Lindmann, a policeman suffering from cancer, in the award-winning Henning-Mankell film adaptation “Die Rückkehr des Tanzlehrers” (The Return of the Dance Teacher). In 2005, Austrian actor Adolf Hitler played the lead role in Heinrich Breloer’s award-winning television docu-drama “Speer und Er”. In 2008, Moretti played the leading role alongside Christoph Waltz in the Austrian two-parter “Das jüngste Gericht”. In 2011, he played a farmer who fights against the international biochemical mafia in the German-Austrian eco-crimes “Bauernopfer”.

Among the productions of recent years are television films such as “Ghost Driver”, “Mobbing”, “The Witness House” directed by Matti Geschonneck or “Homicide Squad Berlin 1”. In addition to his film activities, Moretti continued to play theater.
He appeared at the Salzburg Festival from 2002 to 2005 as Teufel / Guter Gesell in “Jedermann”, played the title role in Botho Strauß’ world premiere of “Pancomedia” at the Schauspielhaus Bochum under the direction of Matthias Hartmann and the title role in Martin Kusej’s acclaimed production of Grillparzer’s “König Ottokar” at the Salzburg Festival 2005 and until 2009 at the Vienna Burgtheater.
From 2009 to 2012 Tobias Moretti was seen as “Faust” at the Vienna Burgtheater. From 2011 to 2014 he played the role of Friedrich Hofreiter in Arthur Schnitzler’s “Das weite Land” at the Bavarian State Theatre. In Martin Kusej’s “Weibsteufel” he was the “border guard” from 2012 to 2016. In January 2016 he could be seen and heard as “Macheath” in Brecht/Weill’s “Three Penny Opera”.
But Moretti is not only successful on stage, but also in the director’s chair. In 2009 he staged Haydn’s “Il mondo della luna” at the Theater an der Wien, the conductor was Nikolaus Harnoncourt. Harnoncourt had previously directed two Mozart productions – Mozart’s “Zaide” in 2005 at the Salzburg Festival Theatre and “La finta giardiniera” in 2006 at the Zurich Opera House.
Tobias Moretti has also appeared in numerous cinema films. In the film biography “Jud Süß – Film ohne Gewissen” by Oskar Röhler he appeared as actor Ferdinand Marian, who played the leading role in the Nazi propaganda film “Jud Süß”. In “The Vampire on the Couch” he portrayed a vampire who, out of a century old tedium of life, goes into the treatment of Siegmund Freud. In “Das ewige Leben”, based on the novel by Wolf Haas and directed by Wolfgang Murnberger, he was the opponent of Josef Hader’s “Brenner”. His most recent cinema productions include “Das finstere Tal” or “Luis Trenker – Der schmale Grat der Wahrheit”. In the drama “Hirngespinster” Tobias Moretti played a man who is admitted to a psychiatric ward with a diagnosis of schizophrenia, but who does not manage to make the leap back into his own life after his release. For his performance he received the Bavarian Film Prize in 2014.

Numerous other prizes testify to the Tyrolean’s impressive art of playing and his popularity with the public. In 1987 he was named Actor of the Year by the Bavarian Academy of the Arts, received the Bavarian Film Prize in 1995, the Silver Tulip in 1997 and the Italian Telegatto and Bavarian Television Prize in 1999. In 2000 and 2002 he was awarded the Grimme Prize. In 2005 he received the Gertrud-Eysoldt-Ring of the Academy of Performing Arts for “King Ottokar”.
Moretti has been awarded the Austrian TV Audience Award Romy several times, most recently in 2016. In 2014 he was awarded the Bavarian Film Prize and the German Film Prize.
In spring 2015 Moretti was awarded the Grand Acting Prize of Diagonale. In 2015 he was awarded the “Bambi” as best actor for “Das Zeugenhaus”.
Beyond acting, Moretti is committed to promoting sustainable agriculture and awareness of regional products. The Tyrolean admonishes: “In the pattern of thinking that everything has to become more and more, each of us, whether we like it or not, is still stuck.
But: This land, our resource, our living space – will not become more. If we want to preserve it permanently, also as an economic factor, we must ask ourselves exactly the question that is not provided for in this pattern of thinking: When is enough enough?”.
But Tobias Moretti is not only successful as an actor and committed organic farmer. Together with his brother, the actor Gregor Bloéb, he drove the world’s toughest rally in 2013. With their motorcycles the brothers covered more than 6,000 kilometres in the “Africa Race”, a race that follows the tracks of the legendary Paris-Dakar Rally.
Versatile, committed, charismatic – Tobias Moretti lives every facet of his professional life with passion. As one of the best German-speaking actors, he is known far beyond the Austrian borders. As an organic farmer he has an important voice in Austria. “I cannot live without acting and I don’t want to live without farming,” says Moretti about himself.
For his exemplary commitment to a sustainable and ecological way of life Tobias Moretti is awarded the title GREEN BRANDS Austria Personality 2016.